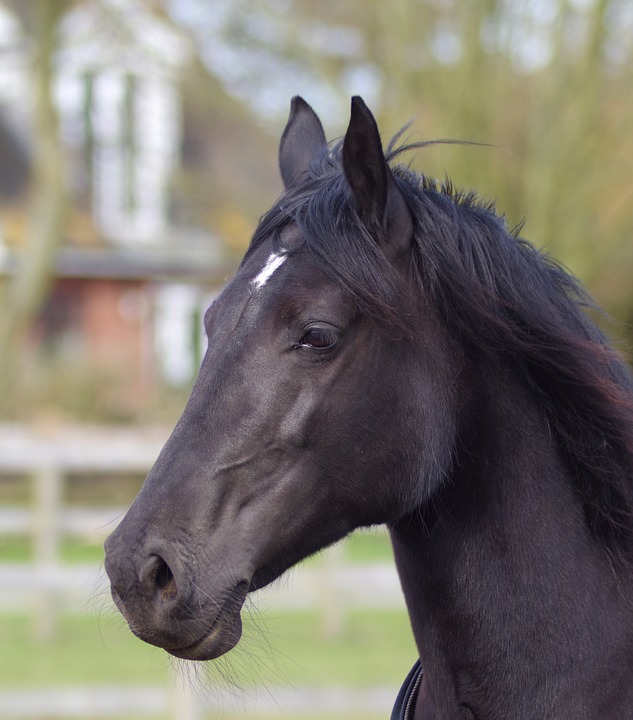 In history, in literature, and on the screen, midnight black horses have held a place in various affections throughout the years.

Horses – if God made anything more beautiful, he kept it for himself. ~Author Unknown

Black is a hair coat color of horses in which the entire hair coat is black. Black is a relatively uncommon coat color, and novices frequently mistake dark chestnuts or bays for black. However, some breeds of horses, such as the Friesan horse, Murgese and Ariegerois (or Merens) are almost exclusively black as midnight. Black is also common in the Fell pony, Dales pony, Ostfriesen and Alt-Oldenburger, Kladruber, and Groningen.

True black horses have dark brown eyes, black skin, and wholly black hair coats without any areas of permanently reddish or brownish hair. They may have pink skin beneath any white markings under the areas of white hair, and if such white markings include one or both eyes, the eyes may be blue. Furthermore, most black horses “sun bleach” with exposure to the elements and sweat, and therefore their coats may lose some of their rich black character. Black horses that do not sun bleach are called “non-fading” or “sheer” blacks.

The genetics behind the black horse are relatively simple. The color black is primarily controlled by two genes: Extension and Agouti. The functional, dominant allele of the extension gene (labeled “E”) enables the horse to produce black pigment in the hair. Without this gene (homozygous recessive condition “ee”), the coat is devoid of black pigment and the horse is some shade of red. The functional, dominant allele (or alleles) of the agouti gene (labeled “A”) enable the horse to restrict black pigment to certain parts of the coat, notably the legs, mane and tail, allowing the underlying red to show through, resulting in bay coloring. Without this gene (homozygous recessive condition “aa”), any black pigment present is unrestricted, resulting in a uniformly black coat.

Black foals are typically born a mousy grey but can be darker shades. As many foals have primitive markings, some black foals are mistaken for grullo or even bay dun; the primitive markings on a black foal will, however, fade. Black foals have dark skin and eyes at birth. An adult-like black foal coat often indicates that the foal will grey, if the foal has at least one grey parent. Greying can be confirmed by the presence of white hairs around the eyes and muzzle. Grey Lipizzaner horses are frequently born black.