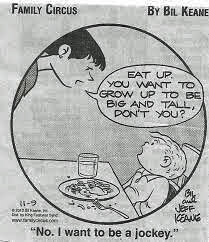 The Family Circus may have a budding jockey in its midst as Billy’s mother implores him to finish his supper.  Little Billy refuses to clean his plate on account of wanting to be a jockey when he grows up. Many jockeys have to fight their weight in order to continue their career. They can turn to bulimia, starvation, dehydration, substance abuse, and other extraordinary tactics to reduce the number on the scales. These extreme tactics can, and usually do, result in kidney stones (due to dehydration), drug abuse (due to over-use of stimulants, including cocaine), muscle cramps and electrolyte imbalance (due to the abuse of diuretics), shortness of patience and mental stress (due to being in starvation mode most of the day, every day), and bulimia (which destroys the stomach, esophagus, and tooth enamel).

There are no support groups for jockeys, as it is such a fiercely competitive activity. Each of them wants to be on top, so assisting or supporting their fellow jockeys with their struggle against weight gain or substance abuse, or helping them find work after their career is over, is non-existent in the racing world. It is literally every man for himself, which makes for a very austere colony of men (and very few women) in that sense.

Maybe one day, an ex-jockey will care enough about his brothers-in-irons to create a support group, but I wouldn’t bet on it; jockeys being some of the most selfish people on the face of the planet. The entire thrust of their life being to get on the best horse in the race, they would throw their own mother under the bus.

Top jockeys earn thousands and thousands of dollars every week, but rarely enter the barn where the horse is trained in order to give a few extra dollars to the caregivers of the winning horse in appreciation of getting that horse to the races in the best possible form. This selfishness is epic. How can a conscientious person appreciate a job well done by the caretakers of their charge and not feel the need to give these people a bonus? especially knowing the meager, embarrassing wages earned for the caretaker’s efforts and endless hours spent grooming the horse? (To my knowledge, even CEOs are not averse to accepting a bonus…) It is unconscionable how the grooms and hot walkers are financially abused by the owners, trainers, and jockeys on the race track.

“You can easily judge the character of a man by how he treats those who can do nothing for him.”

~attribution of this quote is many and varied